Look how beautifully your beans are growing! Oh wait, why are the leaves suddenly all tattered! Don’t look now but it’s a Japanese beetle infestation!

If you are finding beetles in plants, chances are you may have Japanese beetles. Look for that unmistakable copper brown color on their wings.

You can also make an educated guess when you see your plants’ leaves are skeletonized.

Once you know there’s a problem, do your best to learn about it and try to fight back!

I’m working on that myself and will share all my findings and successes here in this post.

Japanese beetles look like a typical scarab beetle with coppery coloring with green accents. The beetles have a hard exterior, antennae, and six legs. These garden pests are loud flyers, and if whizzing by close enough, you’ll actually hear them.

What do Japanese beetles eat?

This year I’m finding terrible damage from Japanese beetles on basil. Our basil was so healthy until the beetles destroyed the leaves with hundreds of holes. I was shocked to find this!

Even our snow peas are being torn to shreds from the Japanese beetles.

Perhaps the worst of the Japanese beetle infestation is our pole beans. Our poor green beans didn’t stand a chance and the beetles are out in full force. I am literally knocking them off the leaves into a gallon jug with water one by one, or two by two if they’re getting lucky.

That being said, we did find them eating zinnias and sporadically feasting on other plants as well.

Where do Japanese beetles go at night?

Head out to your garden with a flashlight after dark and you can likely find loads of Japanese beetles hunkering down under your plant leaves. If you’ve got a green bean patch, raspberry plants, or zinnias, start there. At night Japanese beetles may hide underneath the leaves or they may simply rest on top.

How long are Japanese beetles around?

Adult Japanese beetles live for about two months (around 60 days). They may become very active in late June and throughout July and August, finally dying back in September or so.

It’s a good idea to get a handle on the invasion early on so that it doesn’t get out of hand. These guys are around during prime time summer gardening season!

Why are Japanese beetles so bad this year?

This year seems particularly hard hit from Japanese beetle infestation in our fruit, flower, and veggie gardens. Even our herbs are suffering! It seems the beetles are back with a vengeance and I’m thinking it’s because we haven’t done anything to prevent them.

Using a product like Grub-X tends to stop beetles before they have a chance to emerge and wreak havoc on your garden.

In fact, grubs are the larval form of different types of scarab beetles, including Japanese beetles, June Beetles, and others.

Beetle grubs make excellent bird food and fishing bait, from what I hear. If you find them when digging in your garden, destroy them or make good use of them for bird or fish food.

How to Get Rid of Japanese Beetles in the Garden

When your garden suffers from beetle overload, it’s a frustrating situation. Try a multipronged approach to mitigate the damage from Japanese beetle infestation.

If possible, start with beetle prevention and work your way through treatment to claim back your garden!

So, now that we know a baby Japanese beetle is a grub, we have some ground to stand on. If we can just take care of our lawn with GrubEx or a similar product, we can dramatically reduce the population of beetles come harvest time.

GrubEx and similar products work by killing the eggs and young grub larvae. Of course, you need to apply GrubEx in the springtime. It won’t much help once the Japanese beetles are already flying around your garden.

If you’re dedicated and willing to get up early in the morning (or stay up late at night), you may have a fighting chance. Daily manual removal of Japanese beetles is one of the best defenses.

But let’s be honest for a second here – it’s also one of the most time consuming and labor intensive!

Still, I am all for chemical free pest control, so let’s go through this process.

You’ll need to do this daily to maintain a foothold in your garden.

In fact, some say it works a little *too* well.

With pheromones in the bait, I hear the coppery beetles will come from up to half a mile away. That’s right – they ditch out on your neighbor’s property and come to yours.

In less than a week, we had a bag full of beetles on the fence. I’m just about ready to swap the bag out – they were really swarming it!

The thing is, these bags work! But I also hear they bring way more beetles to your yard. Beggars can’t be choosers… pick your poison? Love to hear anyone’s experience with these!

By the way, I caught the beetles flying on video!

When you notice a Japanese beetle flying, it is likely because it just dive bombed you and buzzed your head. These buggers are not shy.

I caught a video of more than one Japanese beetle flying around a trap we set on our fence. Whatever is in this bait really attracts them!

The Japanese beetles are relatively loud when flying. If you’re near enough, you’ll be sure to hear them.

Sometimes if you can’t win the Japanese beetle battle in other ways, trap crops may be a great option.

The idea is that you plant something the beetles enjoy more than your prized crops. Then if all goes to plan, they go after the trap crops and leave your plants alone.

What Are Some Good Japanese Beetle Trap Crops?

Try growing these crops to distract Japanese beetles from munching on your plants.

Once you notice these pests on your Japanese beetle trap crops, you can collect and destroy them.

Someone from a gardening group on Facebook let me in on a little gardening voodoo. Apparently you can create a natural insecticide for Japanese beetles. This sounded brilliant!

Until I realized what was involved. This process apparently involves catching the copper beetles in a container with water and blending them up in a blender that’s not for food use.

Rumor has it that the beetles emit a stress hormone during this process. That stress hormone later deters other Japanese beetles when you apply the resulting mixture to your garden.

Are you cringing yet? Because I am.

This whole process is jarring to me and feels way too gruesome. I am not sure if I’ll get to my breaking point with the beetles in my garden enough to go through with this. Time will tell!

I’ll be sure to update the post if I do attempt the natural insecticide for Japanese beetles!

I still remember finding Japanese beetles in my pool when I was growing up. They were ugly and annoying and I will always remember those copper beetles.

Finding Japanese beetles on raspberries in my garden was devastating, and ditto with our pole beans and zinnias.

When I saw the Japanese beetles eating basil, I couldn’t believe my eyes as that was a new one for me. Our poor basil is shredded. I’ll need to plant more, but I need a plan, too.

If anyone’s tried it, I’d love to hear about your experience in the comments! Please also share any other tips on getting rid of Japanese beetles or any questions you may have. 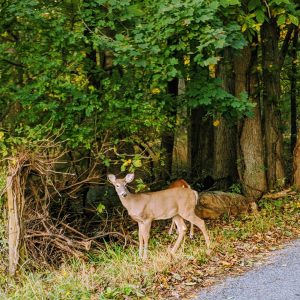 Few things are as frustrating as audacious animals eating your garden! Believe me, I know. I’ve tried to round up a list of deer resistant annuals (flowers, mostly) that you can try in the garden, but keep in mind, a hungry deer is probably not going to turn its nose up at your garden, though…. 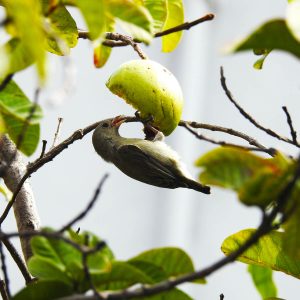 Are birds eating your garden? Birds are lovely to see in the yard, but sometimes they damage plants or eat whatever you’re growing – especially berries. Find out how to keep birds out of garden beds and containers to take back your garden and all its bounty! Keeping birds out of the garden can help… 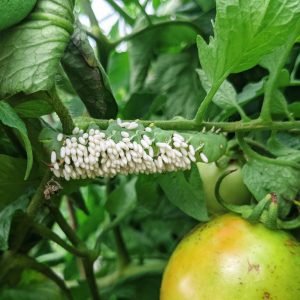 Imagine a blissful tomato jungle as far as the eye can see. Then suddenly, your favorite tomato plant is half gone! What gives?! The tomato horn worm can do serious damage to tomatoes in the garden, so be sure to act fast! Tomato hornworms are the biggest caterpillars I’ve ever seen in my garden. They… 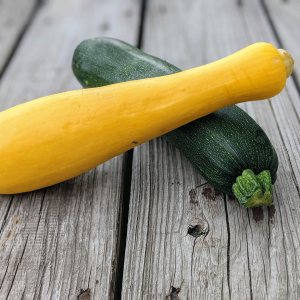 If I could get rid of one garden pest, I think it would be squash vine borers (right after the groundhog!). Those squash borer buggers decimated our zucchini, yellow summer squash, and even our pickling cucumbers last season. We tried surgical attempts to rid the plants of the worms inside the stem, to no avail…. 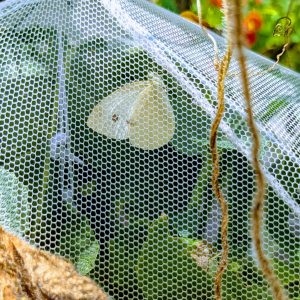 Are you struggling to grow brassicas without those awful green cabbage worms? The cabbage moth (white butterfly) is to blame and I’ve only recently come to know its name and its infamy. When I was young, I loved running through the field on our property chasing after the white butterflies. I’d catch them and then… 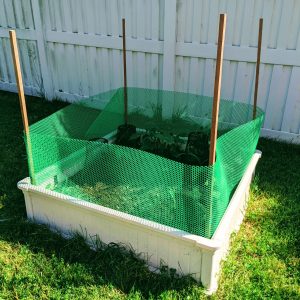 If you read my blog, you know we struggle with groundhogs and bunnies in the garden. Ironic, isn’t it? (: Well, it’s also very frustrating, so I’ve finally come up with a solution – DIY raised garden stake fence barriers that fit perfectly and use food-safe materials. I *know* I can’t possibly be the only…