Imagine finding one of the most toxic plants in the United States in your own backyard! That’s what happened to us when we found a suspicious weed that turned out to be Poison Hemlock.

Deadly poison hemlock weed (Conium maculatum) belongs to the Apiaceae (or Umbelliferae) family, along with carrots, parsnips, parsley, fennel, among others, and wild versions of the same.

All parts of the poison hemlock are dangerous and toxic – the leaves, stem, roots, seeds, and juices. Hemlock toxicity is so perilous that it can kill humans within three hours or sometimes mere minutes.

This plant spreads its poison rapidly by ingestion, and most documented deaths are a result of foraging. Beyond the infamous hemlock poison death of Socrates, of course.

Poison hemlock contains noxious alkaloids, the most poisonous of which is coniine.

The poisoning effects of hemlock range far and wide, from central nervous system disruption to respiratory failure and collapse, vomiting, changes in pulse, convulsions, and coma, to name a few.

Where Is Poison Hemlock Found?

This noxious weed thrives in disturbed areas and lives throughout much of the United States. It originally came here from Europe, intended as an ornamental garden plant.

Toxic poison hemlock is spreading throughout much of Pennsylvania and beyond. It’s important to keep tabs on your own property whenever possible.

How Did Poison Hemlock Get in My Garden?

It’s surely rattling to find a highly poisonous weed in your garden. Knowing how well you care for the garden makes it even more frustrating trying to figure out how a toxic plant got there.

Generally speaking, the most common ways to end up with a poison hemlock garden problem include:

Now that you know how it could get there, let’s figure out whether you actually have a poison plant problem in your garden.

The Hemlock Carrot Conundrum –
What Other Plants Look Like Poison Hemlock

Even before knowing hemlock is in the carrot family, I immediately saw this poisonous weed does bear an uncanny resemblance to carrots – wild carrots, in particular. It also looks similar to yarrow, Queen Anne’s Lace, elderflower, wild fennel, and cow parsnip.

It is extremely important to avoid eating or touching plants that could be poison hemlock if you aren’t 100% sure beyond a shadow of a doubt.

How We Found Poison Hemlock in Our Garden

At first, I thought one of our rainbow carrot seeds fell into a corner of our green bean bed. It seemed so odd because we hadn’t planted any carrots around here.

I remember actually touching the leaves, thinking how like carrots they were. But also realizing the entire plant was much bigger than any carrot I’d ever seen!

Luckily for me I didn’t develop any rash or toxicity from that brief encounter. I washed up immediately inside and funny enough, saw a Facebook post a few nights later that would chill my blood.

It was after 11 p.m. and I was just scrolling on my phone. I follow a ton of gardening groups and happened to see a photo in my feed that reminded me EXACTLY of that weed in my garden.

I of course read the comments on this gardener’s post. Turns out most people on the thread urged caution and removal, suggesting very strongly that this person’s mystery plant was poison hemlock.

I SO wanted to go out to my garden that night in the dark to investigate our strange weed down to the details. But I didn’t. I was already 99.9% sure we too had the purple spotted hemlock weed.

That very next morning, I began my investigation and a thorough poison hemlock identification process.

Identifying hemlock in the garden isn’t difficult if you know the signs. Remember to also proceed with caution.

I also strongly suggest reaching out to a group of local master gardeners, such as your region’s extension office. The knowledge and support can be truly helpful.

Here in PA Zone 6b, I reached out to the Penn State Extension Master Gardeners of Huntingdon County. I received tremendous help from Deb and Julia, who made a positive identification and then guided me in safe removal of this pesky plant.

Check with your local extension as well for support in identifying hemlock and safe removal.

Here are a few additional tips to help you make a positive poison hemlock identification:

The poison hemlock leaves look eerily similar to the fringy greens of carrots. (But beware – hemlock is one of the most poisonous of all plants in North America!)

The rich green hue is vibrant and stands out from across the yard. It’s hard to miss unless it blends in with other foliage in your gardens, fields, or woodlands.

The first year, hemlock grows a rosette of leaves and doesn’t reproduce.

The poison hemlock flower only appears during the second year of growth. This biennial flowering herbaceous weed produces umbrella-shaped white flowers that can spread seeds everywhere, exploding its growth and spread.

The white flowers of poison hemlock may bear a resemblance to Queen Anne’s Lace or yarrow. When in doubt, rip it out.

The dead giveaway of this toxic weed is the hemlock stem. Notice the purple splotches.

Upon careful inspection, you will notice the stem is smooth and hairless. Plants that look like poison hemlock (but aren’t) often have fine hairs on the stem.

More significantly, though, is the color of the stem. Poison hemlock’s stem has distinctive purple blotches that just about seal the deal.

The purple hemlock stem is a telltale sign that should be the final piece of convincing evidence that you need to remove this plant from your garden.

Here’s a resource to help you with identifying poison hemlock in your yard or garden.

What to Do If You Find Poison Hemlock in Your Yard

Spotted hemlock is no joke! If you suspect you might have this highly toxic weed in your yard or garden, proceed with extreme caution.

CAUTION: Eating hemlock can be deadly with severe symptoms occurring within minutes or hours.

Touching hemlock can also be problematic, with some reports of skin absorption of the toxins, especially on a warm day. Be sure to wear proper protective clothing and gear.

Removing Poison Hemlock from Your Yard or Garden

Preparation is the first step in removing poison hemlock from your garden or yard. Be sure you have all the materials needed to safely remove hemlock weed.

Gather these materials and set them out by the hemlock garden site:

Put on protective clothing and gear:

Now, follow these steps to go about safely removing poison hemlock from the yard or garden:

Isn’t it odd that the hemlock plant grew directly in our raised garden bed, of all places?!

Because hemlock weeds have a very long taproot, I worried that the root may have gone below the garden box, through the weed matting and hardware cloth, and into the rocky clay soil below.

Other Varieties of Hemlock

Also known as European hemlock or poison parsley, poison hemlock is notorious for the swiftness of death it can cause.

Meanwhile, other types of hemlock are also highly toxic and problematic. These include:

Do you suspect you might have poison hemlock in your yard or garden? Please be so careful and keep your family and pets safe.

Feel free to ask any questions or share your story here in the comments! This was such a wild experience; I’d love to chat about it with anyone else going through it.

Happy Gardening and be safe! 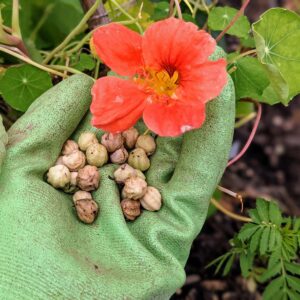 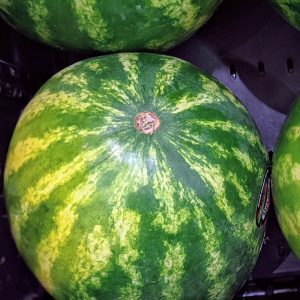 If you’ve ever tried growing watermelon, you’ve likely noticed it takes up quite a bit of space in the garden! I sure did, so I got to thinking about watermelon companion plants so I could maximize my growing space. I’m happy to share my favorite combinations of what to plant near watermelon and what to…

Mint sometimes gets a bad rap in the garden. Finding mint companion plants can be a good way to make the most of this versatile herb. (A much better way than growing mint willy-nilly in the yard like I did. *facepalm*) I’ll never make THAT mistake again. When we first moved to our home, I… 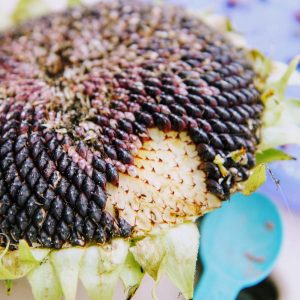 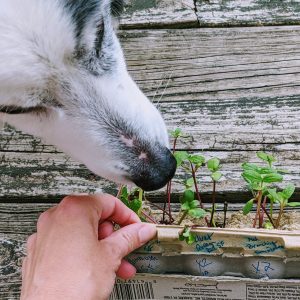 Sunflowers seem to be one of the cheeriest flowers in the garden! They grow beautifully alongside vegetables and other flowers. Try starting sunflower seeds indoors to get a jump start on your flower garden this year! So many different varieties of sunflowers look gorgeous and make it difficult to choose just one to plant. I…

“Leggy” is a word used to describe seedlings that grow thin and spindly. Leggy seedlings are a common problem for many gardeners of all ages. The good news is knowledge is power and I can help you fix leggy seedlings! What Causes Leggy Seedlings? When seedlings growing indoors don’t get enough light, they become leggy….